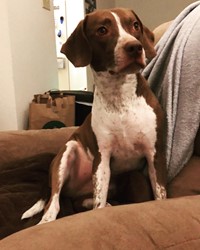 In July 2016, in residence at the APS of Durham, Paisley, then known as Tandy, was waiting patiently like a good little girl for her furever home. Enter Tim.

A lover of all four-legged friends, Tim had been thinking about fostering a dog, especially a beagle or other hunting dog. APS kept an eye out for Tim to see if any beagles made their way to Durham and, one day, were blessed with the presence of a Miss Paisley, a beagle mix. 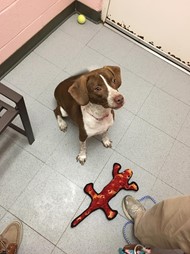 Though Tim didn’t necessarily have firm plans to adopt a dog, working for a brewery and traveling regularly, he always had his eyes peeled — just in case. As soon as he saw a picture of Paisley from the APS, all bets were off. All it took was a photo (which we totally get — look at that face!) to convince Tim to come out to APS for the day for a meet and greet. Then, as soon as Tim and Paisley met in the greeting space at APS, Tim thought, “Yep. I love her, and that’s my dog.” 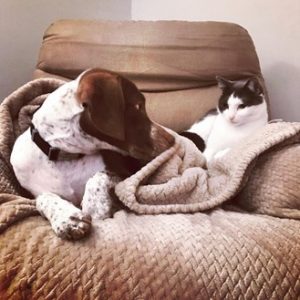 There was just one thing to make sure of before it was signed, sealed, delivered. Tim’s cat, Luna, was supposed to be a quiet non-lap-cat that didn’t exactly like dogs. Would Luna be cool with a new sister that maybe, possibly drooled a lot? The answer was yes; it only took about a month for Luna and Paisley to become inseparable. 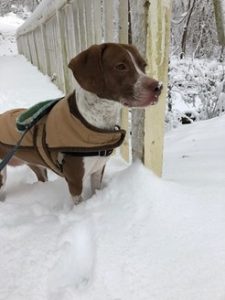 Today, Paisley spends her days sleeping on her own private recliner, and the rest of the day right beside her humans, no matter what they’re doing. She goes on trips, hates the cold and yet, somehow, loves eating the snow.

She’s a loving, people-oriented dog. She is always wanting your attention (have snuggles, will jump!), and she learns oh-so quickly. Tim’s “I love her moment”:

And that’s what we call a Happy Tail! 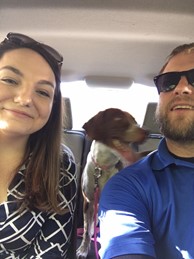