A touching story about a cat finding it’s right place in the world, as told by her owner Debra English.

“Twenty years ago, I visited APS of Durham in search of Emily Grace. That’s right, I’d named her before I knew her. I searched several shelters to find the girl who matched the name. Small cats, large cats, kittens – it seems like I’d seen them all but none of them tugged at my heart. And then the woman (I don’t know if she worked there or was a volunteer, but she certainly was an angel) said that she had a cat that I just had to meet. This cat was just the sweetest thing. However, she was on a 10-day scratch hold. She explained that a younger volunteer had startled the cat and she’d scratched them.

Emily Grace was in a larger cage in a separate room, where more cats could have been, but I only had eyes for her. When I approached her cage, she rolled onto her back and stuck her little paws in the air and through the bars of the cage. She was so thin. Her whiskers had been trimmed off. She was beautiful. I wanted her and she wanted me. But there was that darned scratch hold thing. I couldn’t put a hold on her either. But I could visit her every day unt 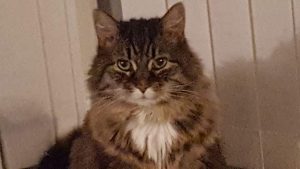 il she was released [for adoption]. As I recall, we had only 3 or 4 more days of the scratch hold when I received a call from your shelter, Emily Grace was sick. She might have an upper respiratory infection. I left work at GlaxoSmithKline to be with her. A kind worker let me take her from her cage and rock her. She was pathetic, warm to the touch, raspy breathing… My vet confirmed that Emily Grace did indeed suffer from an upper respiratory infection and an eye infection. We got a couple of injections, lots of meds and then we went home. I put her on my bed, and she slept with me, and I held her paw. Each day I gave her the oral medication and the eye ointment, and she never fussed about either. She ate quite a bit and slept most of the time. Two weeks later she gave birth to 6 kittens. No one had suspected a thing.

Emily Grace moved from North Carolina to Florida with us. I drove just so that I could ensure that she was safe. There was always a pretty kitty waiting for her in each hotel room mirror on all trips. She was fascinated. Warmth, sunshine, and fresh air coming through the windows. She loved Florida. Then we moved again, by car and staying in hotels, after 3 years to Wyoming. She loved the pellet stove that warmed her each winter. And we adopted her a kitten, Skynyrd, which she knew belonged to her. After 10 years we moved to Minnesota.

Emily Grace made an impact on my heart. I don’t know who introduced us, but you can let your staff know that there is a person for every cat and a cat for every heart. We were able to love Emily Grace and adore her sweetness and beauty for 20 years. I was told that she was a three-year-old cat when I adopted her. We lost our beautiful girl on February28, 2022. Your staff did a good job. The worker went beyond to match us, and I’ll be forever grateful. Bless you all for everything that you do.”